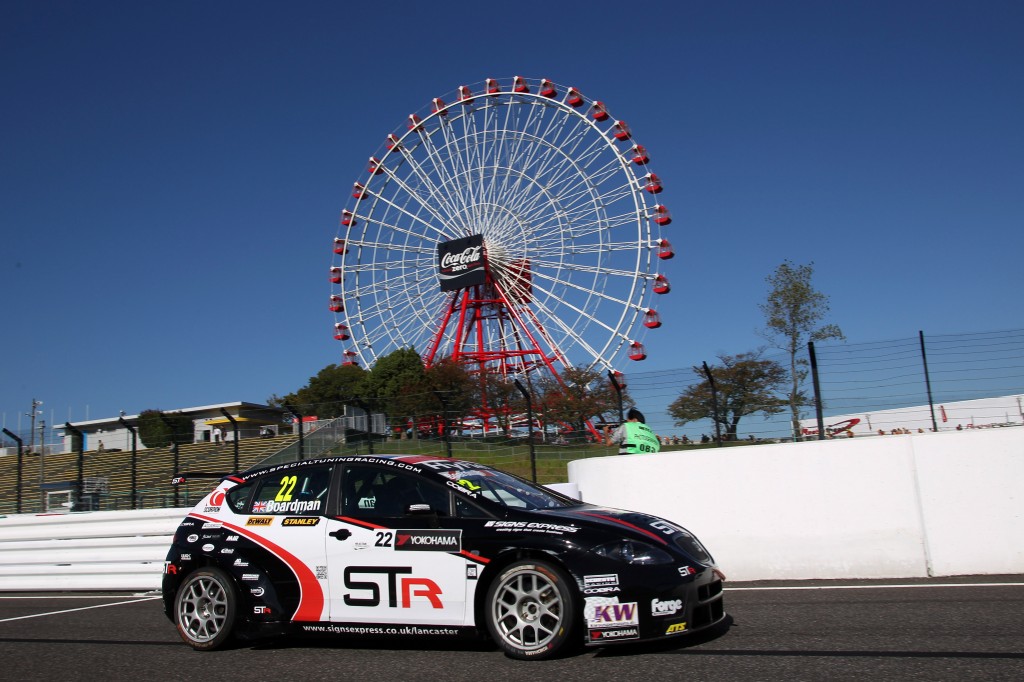 The teams first trip to Suzuka and both drivers would have to learn a new track. The practice sessions saw an improvement in times from both cars and Tom was hovering just out of the top 12. Qualification was a very tight affair. As the short track was being used for this weekends racing, less than a second split the top 15 drivers. Tom put in a 53.847s lap which saw him 0.107s off the targeted 12th position which would have meant going into qualification two. Rene put in a 54.690s lap, which in his first weekend in a WTCC SEAT on a new track was a great effort.

The nature of the track would mean that overtaking would be difficult. This proved to be the case in both races. Race one, and Tom got off to a good start and on Lap 4 over took the Independent leader Norbert Michelisz to move into 14th. He was then in a battle with Japanese driver Yoshimoto who managed to pass him on lap 5. Tom was then pushing hard to regain the position whilst coming under immense pressure from Michelisz. For the next 6 laps that group provided all the action for the crowd and eventually Tom forced a mistake from Yoshimoto which enabled him and Michelisz to pass. Tom then set off to track down Darryl O’Young now racing in the Bamboo Chevrolet. Michelisz was also keeping the pressure up as his rear wheel drive BMW got stronger as the SEAT’s tyres began to lose performance.

Rene was lapping well and making up a few places and on lap 21 showed his rally cross skills with a great save on Turn 2. Tom also showed his skills when Michelisz out braked himself and contact was made. Tom recovered the slide to hold on to the position providing even more great entertainment. The pressure continued but Tom held on very well to finish 12th overall and 6th in the Independents. Rene finished in 17th which is 10th Independent.

Race two followed a similar pattern with overtaking proving difficult. Tom again got off to a great start and by the end of lap 1 was up to 12th position. On lap 4 he was right behind the new Honda of Tiago Monteiro, pulling a great move to try and pass, but ultimately he couldn’t make it stick. The rest of the race was spent trying to track down the Honda whilst holding off the Chevrolet of Darryl O’Young. Tom could not make up more ground and held his position to again finish 12th, 7th Independent. Rene again drove well to finish 20th which was 12th Independent.

Commenting on the races Tom said “I have really enjoyed racing here at Suzuka. Ultimately the success of the weekend was always going to be based on qualifying, and not quite being able to get through to the top 12 meant making up ground was going to be tough. To finish both races ahead of where I started was a good result and in tight racing its great to be able to achieve that. I am now looking forward to racing at Shanghai in a couple of weeks.”

The team will now prepare for another new circuit at the Shanghai International Circuit on the weekend of 4th November.