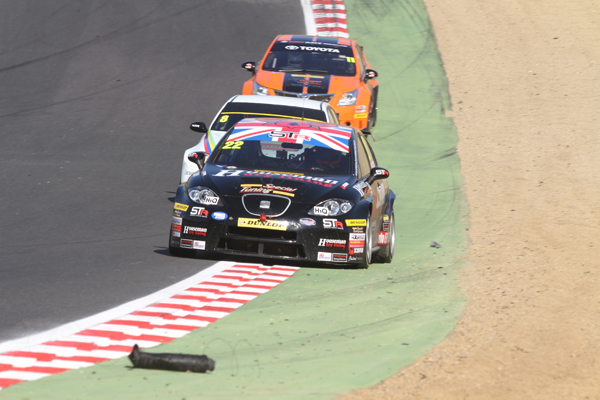 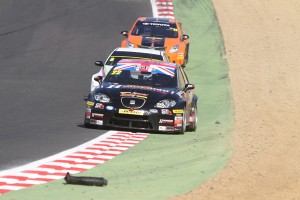 It was a tough weekend for Tom and his Special Tuning Racing team in the penultimate round of the Dunlop MSA British Touring Car Championship at Brands Hatch last weekend. But, despite only a minimal points haul, the small family-run team continued to demonstrate their power to match the pace of the established runners.

With a superb get-away Tom was up to tenth off the line before being muscled out into the first corner. He fought back, quickly regaining the spot on the second lap. He then held position for the next eight laps before advancing two places as both Honda drivers retired with punctures. Running in eighth, he then put up a determined defence to retain the spot as he endured several laps of intense pressure from Rob Collard’s BMW. Fortunately for Tom, Collard came under attack himself from and this gave Tom some vital breathing space. But the pressure had taken its toll and having just started the final lap, coming out of Paddock Hill Bend, disaster struck as the SEAT suffered a left-front puncture and Tom was unable to finish the race.

Starting 23rd in race two, Tom got off to a phenomenal start, his searing pace seeing him overtake nine cars over the first lap. He then hustled Michael Caine in the Ford Focus for the next three laps before seizing 13th position over the start/finish line. With two retirements ahead, Tom then chased down 12th place. But with the BMW in front stronger at the back end of the race, Tom was unable to make a move and he had to make do with eleventh, narrowly missing out on the reverse grid draw for race three.

Starting the final race from 11th, Tom maintained position over the first lap before making a great move on current champion Jason Plato on the second, overtaking him on the back straight. Just one lap later he pulled the same move again, to go ninth and up behind Nick Foster’s BMW. Determined not to get stuck behind the BMW again, Tom made his move on the fifth lap. Up to seventh, with just three laps to go, Tom’s race was almost cut short yet again. Recovering from an off-track excursion, Andy Neate returned to the circuit, veering his Focus straight into Tom’s path. The move forced Tom to take swift evasive action to avoid a collision. In doing so he lost two places and he crossed the finish line in ninth.

Reflecting on the race, Tom said: “I had three laps to go when I saw Neate go off into the gravel ahead. I didn’t think anything of it, but then I saw him creeping along the gravel and he came back straight back on to the racing line!”

“I had to make a move on to the gravel to avoid him, but losing places having got past some of the top guys is really frustrating,”he continued. “It’s not to be again, but we’ll look to Silverstone and hopefully have some better luck there.”

“I had to make a move on to the gravel to avoid him, but losing places having got past some top guys is really frustrating,” he continued. “It’s not to be again, but we’ll look to Silverstone and hopefully have some better luck there.”

The team now head to Silverstone in two weeks’ time looking to continue this season’s great form and end the championship on a high.