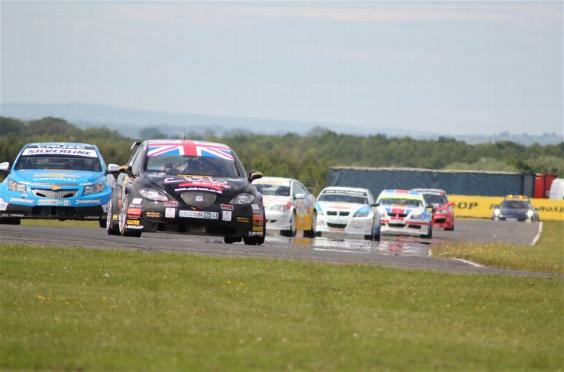 The latest round of the Dunlop MSA British Touring Car Championship took place at the picturesque Croft motor circuit in North Yorkshire this weekend, but it was to finish in disappointment for Tom when he was cruelly denied a first podium result in a nailbiting finish.

It was a frustrating start to the weekend for Tom when a gearbox oil leak restricted his SEAT Leon to just six laps in the free practice sessions. This left him on the back foot in qualifying, and despite putting in a time that would made pole position last year, he would have to start race one from 13th on the grid.

Going into the first of the day’s races Tom maintained his record of strong starts in the competition, and before the first lap was over he had brilliantly manouvered his way up the field into tenth. However, in what turned out to be the first of several skirmishes with the Airwaves BMW cars, Tom was pushed out wide firstly on lap seven where he dropped three places and then again on lap 14 when he had to produce a brilliant piece of a control to keep the car on the track. This left him in 12th place where he was to end the race.

Race two again saw Tom make a strong start from 12th on the grid, and by the second lap he was up into tenth place. By lap three he had moved up to seventh following an incident in the battle for midfield position, and from where he had to endure a difficult contest having to defend on every lap from the aggressive charge of Steven Kane’s BMW. A retirement further up the field then moved up Tom up a position and despite briefly losing the spot to Kane, he brought the car home in sixth place and taking five points in his push for the Independent Drivers title.

Tom’s sixth place handed the 26-year old second place in the starting line-up for the last race of the day when the reverse grid draw was made, but despite a good start he was unable to match the pace of the turbo-charged Vauxhall Vectra and the Ford Focus off the line, and he was also muscled out going into the second corner. He then moved up into third when Plato’s Chevrolet suffered a puncture, but spent the next seven laps under immense presure from the Honda Civic that had won the first 2 races of the day, and then the WSR BMW of Rob Collard who then took the position on lap ten. Collard however had to pit on lap 12, again elevating Tom back into third. Fending off the challenge from Paul O’Neill in the Honda Integra was Tom’s next challenge and there was some classic touring car action with both cars swapping positions and running side-by-side down the start-finish straight. But the tussle allowed the chasing pack to catch up and Tom who had defended valiantly all the way to the last lap was then fiercely bumped wide through the fast left-right Esses again by Steven Kane who together with Chilton in the Ford Focus made their way past. Tom’s luck then went from bad to worse when O’Neill sliding under braking into the final hairpin, cut to the inside of the corner, and robbing Tom of a fifth place finish.

Speaking after the race Tom said: “I’m really disappointed. To have the podium finish taken away is hard to take. But we’ve shown we’re able to race from the front and we’ve got the pace to deliver.”

Tom is now eighth in the Independent drivers’ table and Special Tuning UK lies seventh and ninth respectively in the outright and Independent teams’ championships.

The next race takes place at Snetterton in Norfolk on 8 August.

For more pictures from this round view our gallery here.