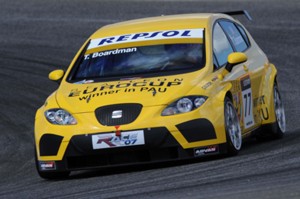 Tom Boardman is aiming for a regular place in the FIA World Touring Car Championship after the 24-year old driver from Forton in Lancashire finished 3rd in the Independents’ Trophy category on his WCC debut – proving that he is more than capable of racing with the world’s best.

Having won his place on the WTCC grid by winning the SEAT Eurocup round at Pau in France, Tom made his WTCC debut in a SUNRED team prepared SEAT Leon TFSI at Estoril in Portugal last weekend (July 12-13). The car arrived in a neutral set-up, so Tom spent the test on Friday and the two free practice sessions on Saturday setting the car up for his driving style – setting a faster lap time in every session. Indeed, by the end of Free Practice 2 Tom had set the 14th best time out of 26 cars, had knocked 1.301 seconds off his first session time and was ahead of the likes of Yvan Muller, James Thompson and Jordi Gené.

Tom spun on his first flying lap in qualifying, but he quickly regained his composure to set a time of 1:49.508 around the 2.7 mile track, which put him 19th on the grid.

Tom made a great start in the first of two races to overtake several cars on the run down to Turn 1 – including his SUNRED team-mate and former WTCC Independent World Champion Tom Coronel, who was to later finish 10th in the race. Exiting Turn 3, the car ahead of Tom, Augusto Farfus (BMW 320si), was hit into a spin. Veering to the right of the track, the Brazilian driver’s car then swung violently sideways and back to the left as the field headed down towards Turn 4, hitting the rear of Tom’s Leon. The big impact broke the SEAT’s rear right wheel and suspension and sent Tom spinning into the gravel trap on the inside of the circuit.

Not only was Tom’s race over through no fault of his own, he would now have to start the day’s second race from the back of the grid.

Tom Boardman said: “Racing in the World Touring Car Championship was a great experience, much better than I’d imagined it would be. Everything is so professionally run and the atmosphere is amazing. After such a good build up I was feeling confident going into race one. My car had arrived in a neutral set-up, so we’d used the free practice and qualifying sessions to get it set-up exactly how I like it and everything was working very well. It wasn’t the latest spec touring car, but I knew I could put in a good performance with it.

“I made a good start and overtook my team-mate, Tom Coronel, and was in the middle of the pack when Farfus spun in front of me and hit the back of my car. There was nothing I could do to avoid him. That impact spun me into the gravel, but I couldn’t have continued in the race anyway as a rear wheel was hanging off.

“I was gutted for the team, because it’s the car the winner of the Eurocup rounds gets to race in the WTCC and I wanted to be the driver who gave them a good result. Anyway, we had a good second race and came from the back of the grid to finish 17th, which I was quite pleased about. “My aim now is to win the Eurocup title, the prize for which is a drive at the FIA European Touring Car Cup in Austria in October, and try and get back into the WTCC as soon as possible. I proved on my debut that I can be competitive, and the WTCC is definitely the place I want to be racing.”

Tom will next be in action in Rounds 7 and 8 of the SEAT Eurocup, which are support races to the WTCC at Brands Hatch on July 26-27.