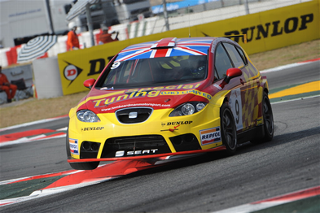 Tom Boardman, from Forton in Lancashire, has won the Spanish-based 2008 SEAT Leon Supercopa title in his Special Tuning UK Ltd-backed Triple R team Leon Cupra after he turned a 19 point deficit going into the last race meeting of the series at the Circuit de Catalunya near Barcelona (November 1-2) into a championship winning advantage. His prize is a works drive with SEAT Sport in a round of the 2009 FIA World Touring Car Championship.

Despite only turning 25-years old three weeks ago (on October 15th), this is Tom’s fifth motor racing title. He also becomes the only driver to have won a SEAT touring car title in Britain and Spain, having won the UK-based SEAT Cupra Championship in 2005.