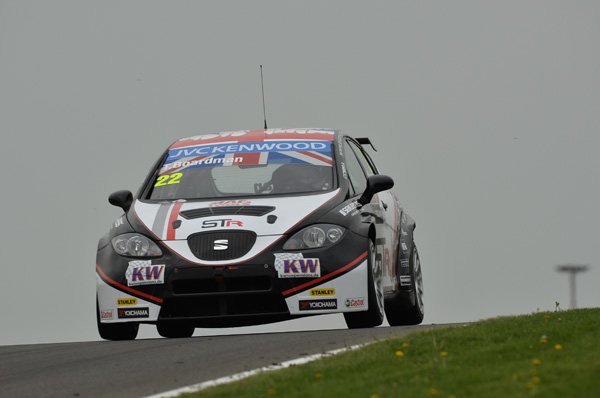 The team headed to Slovakia for the 5th and 6th rounds of the Championship having carried out major works to repair the car following the coming together with a wall at Marrakech. The car also required a new engine which SEAT Sport duly delivered on the Thursday prior to the event for fitting. The team and SEAT Sport engineers worked hard to fit the engine in time for FP1 on Saturday.

Early Saturday morning and Tom prepared to go out to try out the new engine. From the outset the performance seemed sluggish and this was also evident in the data. Tom came in for a tyre change. On his next run though the engine failed and Tom was forced to park up and wait for the session to finish. On its return to the garage it was clear that an engine change would be required and the SEAT and STR mechanics made the change and had the car ready to go out again for FP2.

For FP2 Tom was looking for the correct set up that had seen him race at the Slovakiaring so successfully in 2012. Although he was in the diesel at that time, he finished in P9 starting from the back of the grid. With the second engine of the weekend fitted, Tom went out to try and set a time. This however was not to be, as the second engine also failed in a similar fashion, and the cause needed to be found fast.

SEAT Sport and the team worked tirelessly for the rest of the day, and long into the night, looking for the causes. It was decided to fit a third engine, and make further changes to the car, to eliminate all possible causes of the failures and then run Sunday as a test in order to make sure the issues would be sorted for the following week in Hungary.

Race day arrived and Tom went out cautiously in the Warm Up to try out the latest engine. He put in 5 laps, coming in regularly for data reads. This went to plan and for race 1 he started from the pit lane and ran an agreed six laps. Again the car finished this. Finally for the last race of the day, Tom started from the back of the grid and completed the race finishing in P18.

Commenting on the weekend’s experience Tom said “This is obviously very frustrating for all involved. Not knowing fully the cause of the failures makes it all the more difficult. Both SEAT Sport and our team have worked very hard over the weekend to fix it and for that I am very grateful. I am sure the changes that were made for Sunday will enable us to run properly in Hungary next weekend”

The team will continue to work with SEAT Sport to resolve fully the engine issues in time for the next round at the Hungaroring on 4th and 5th of May.