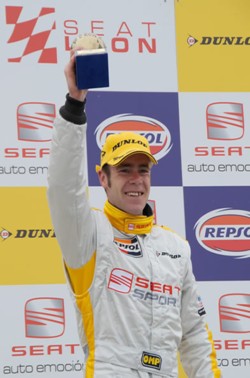 Jarama SuperCopa Round 1 Victory for Boardman

The Lancashire-based Triple R team got its 2008 racing season off to the perfect start, when it won the opening round of the SEAT Supercopa at the Jarama Circuit near Madrid. Tom Boardman, the talented 24-year old driver from Forton, came from 2nd on the grid to overtake double Supercopa Champion Oscar Nogués to set the fastest lap of the race and score a convincing victory in his Special Tuning UK Ltd-backed SEAT Leon Cupra.

With one 14 lap race completed on Saturday (May 3rd), a further two back-to-back 7 laps races took place the following day around the 11 turn, 2.1 mile circuit. With the top six from the previous race starting in reverse order, Tom started 6th and was soon running in a strong 4th place. With scoring points and winning the title firmly on his mind, Tom was content to finish in that position, but the car in front was holding him up, allowing the pack behind to close in. Towards the end of the race, the car behind hit Tom into a gravel trap, where he was beached for 30 seconds before regaining the track and finishing way down the order.

This meant that Tom had to start the third and final race from the back of the grid. In front of 30,000 spectators, a magnificent drive saw him start 32nd and carve his way through the fleet of hard-charging Leon Cupras to finish 9th.

Having started the Supercopa series by scoring the maximum 21 points in Round 1 (which includes an extra point for setting the fastest lap), Tom now feels he will have to score well in all the remaining 15 rounds to allow him to drop Round 2 (where he scored no points) and Round 3 (where he scored 3 points) from his overall total at the end of the season – as winning the Supercopa title is his one and only aim.

Tom’s Triple R team-mate, Liam McMillan, enjoyed a good Supercopa debut. The 18-year old driver from Wisbech near Peterborough qualified in 26th out of 33 and with a good pace was able to finish all three races in 24th, 24th and 16th positions.

Immediately after the final race Tom, with his HGV licence, began the long road journey back to Britain behind the wheel of the Triple R team transporter, carrying both race cars and all the equipment. Triple R only has a few days to re-prepare the cars and return to Spain for the opening round of the SEAT EuroCup – which takes place at the 120,000 spectator capacity MotoGP circuit in Cheste, near Valencia, on May 17/18. The brand new 12 race series takes place at six of the European meetings of the FIA World Touring Car Championship (in Spain, France, Germany, Portugal, England and Italy) and has a revolutionary prize system which will see the top driver at each race meeting win a drive with the works SEAT Sport team in the next round of the WTCC, driving a Leon WTCC. So whoever wins the EuroCup at Valencia wins a fully-funded WTCC drive with SEAT Sport at Pau in south-west France on June 7/8.

Tom Boardman said: “Winning the first race was the perfect start to the season. We had high hopes of doing well in the second race too, but when we got up to fourth the guy in front was holding me up and driving very defensively. I would have been happy to finish fourth and score championship points, but I could see in my mirrors the pack closing in and my fears came true when I got punted off into the gravel by the car behind. I was really determined to come from the back of the grid in the third race and it was good that the races on Sunday are run one after each other, because the adrenalin was really pumping and I was pretty fired up! I didn’t ease off until I’d crossed the chequered flag, and although finishing ninth wasn’t bad, it was a race I wanted to win. I can’t wait for the next Supercopa race weekend and get back to our winning ways.”