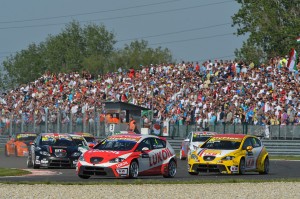 Special Tuning Racing finished round ‘s 7 and 8 of the FIA World Touring Car Championship on a high after strong showings in both races.  Like all the teams, this circuit was new to both Darryl O’Young and Tom Boardman.

Saturday’s free practice sessions had proved difficult, as the team worked to understand the characteristics of the track, and both drivers tried to get the most out of their respective cars. Qualifying was also disappointing, as Darryl couldn’t find the speed necessary to get in the top 12.  Tom didn’t manage one lap as a mechanical failure on the car saw him limp back to the pits. Despite the valiant efforts of the team, the repair could not be completed in time for him to return to post a qualifying time. Darryl would start both races in 16th, and Tom from 21st at the back of the grid.

Sunday saw 30 degree temperatures and deep blue skies. A sell out crowd of over 25,000 packed the Slovakiaring circuit.  With their lowly grid positions both drivers knew hard work and skillful driving would be required to make their way up the field. With the rolling start of the first race, Tom was quick to make his move up the order. He is no stranger to quick starts, and again proved that he is a match for anyone, whether it be a rolling start or a standing one.

With the two works Lukoil SEAT’s battling for the lead with the local favourite  Norbert Michelisz , the real action was taking place further back as both Darryl and Tom made up places. Michelisz was eventually deposed by both SEAT’s as the action moved to the front of the race. However, by lap 7 Darryl had moved up to 8th and Tom 10th. Darryl then passed Tom Coronel to go into 7th overall, and Tom moved up to 9th. The race finished in this order, but subsequently Tom Coronel was given a 30 second penalty by the stewards, moving Tom Boardman into 8th overall. He had gained a highly impressive 13 places in the TDi. Darryl was 5th in the Independents and Tom 6th.

Round 8 saw both drivers again make up places, this time from the standing start. Darryl again showed excellent race craft to keep out of trouble and make up places. By the third lap he was in 10th spot. Tom had a blistering start and was soon right behind Darryl. However the pace of the 1.6T WTCC engine showed, and with the field thinning out ahead, Darryl was able to pull away and battle for higher places. Tom, on the other hand, now had to enter defensive mode as the Chevrolet of Di Sabatino and the BMW’s of Engstler and D’Aste tried to pass. The only successful driver who did pass him was Tom Chilton in the Ford.  Darryl finished 9th overall, 5th Independent, and Tom 11th overall and 6th Independent.

After the races Darryl commented “It was a brilliant race for us today. Qualifying is really a struggle for us right now. Marrakesh and here we qualified in 16th so we are making it tough for ourselves. Imagine what could happen if we can start up in the top 10. However, finishing today in 7th and 9th is a big result”

Tom was also happy with his races. He commented “That was a good race but very frustrating at having to start from the back. It gave me a lot of work to do. I managed to get good starts both times though, and I am now understanding better how to get the most out of the diesel. Hopefully I will be able to qualify better at the next round and look to get more top 10 finishes, which for the TDi is a great result to get”