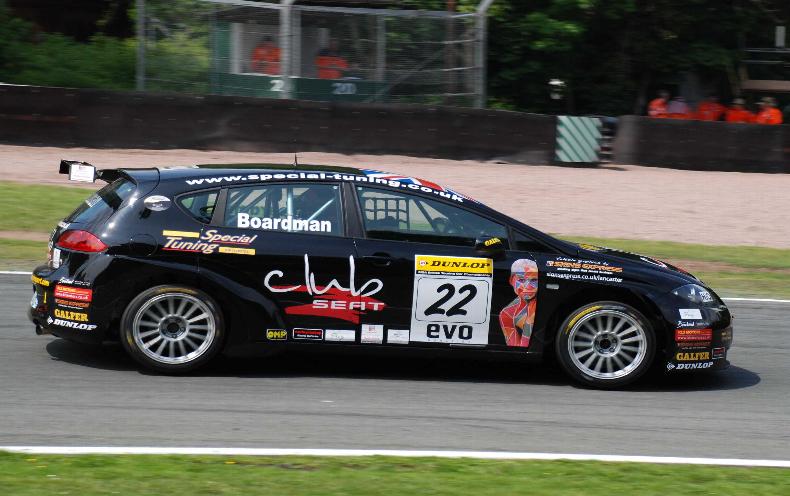 The latest round of the exhilarating 2010 Dunlop MSA British Touring Car Championship took place at Oulton Park in Cheshire last weekend, and Forton driver Tom Boardman headed to his home circuit brimming with confidence, having accomplished six finishes inside the top ten from the season’s opening nine races. Cheered on by a huge crowd of local supporters, Tom began the first race from 12th place on the grid in the Special Tuning UK Club-SEAT Leon, almost immediately gaining two positions from the start. But his recent run of good luck was to run out just two laps in, having just passed Championship leader Matt Neal for 9th when a driveshaft problem forced him to retire from the race.

Speaking after the first race, Tom said: “The car felt great in qualifying, and I really thought I could have been in the mix, so when the driveshaft went I was really disappointed at not being able to add more points to the board.”

Retirement in race one meant Tom having to begin from the back of the grid in 21st place, but another tremendous start saw him move up to seventeenth before having to skilfully avoid a collision between several cars ahead of him all on the opening lap. Tom then went on to finish in a very impressive eighth place, and setting fourth fastest lap, a position made all the more important with the top nine finishers being reversed to form the grid for race three, handing him second spot.

A good start ensured Tom held position but the race had only just begun when the safety car had to be deployed at the end of the first lap. The race then resumed two laps later, and Tom made a great move to out brake the race leader and take the lead, much to the delight of his fans. After a fierce battle he briefly lost the lead to Tom Chilton in the Ford Focus on the ninth lap, but when Chilton slid wide the lead was handed back. Tom was then forced to boldly defend his lead for several laps before Matt Neal of Honda Racing swept past him on lap 14. His race was then cruelly cut short when the car’s front steering arm collapsed on the next lap, denying what would have almost certainly have been a podium finish and his second Independent drivers’ win of the season.

After the third race, Tom said: “Having led the race for almost 13 laps I thought I was in with great shout of a podium, so I couldn’t believe it when the steering arm broke with just three laps to go. I’m gutted, but I know we’ve taken another good step forward here. The Special Tuning UK team have worked really hard doing a great job on set-up and we know we’ve got the pace to maintain a challenge in the Independent Drivers title.

“The home support here was fantastic and together with family and friends cheering me on I was really spurred on to do well, and I’m truly grateful for everyone’s encouragement,” Boardman continued.

Tom is now seventh in the Independent drivers’ table and Special Tuning UK lies sixth and ninth respectively in the outright and Independent teams’ championships.

The next race takes place at the Croft circuit in North Yorkshire on Sunday 20 June 2010. Come along and show your support.