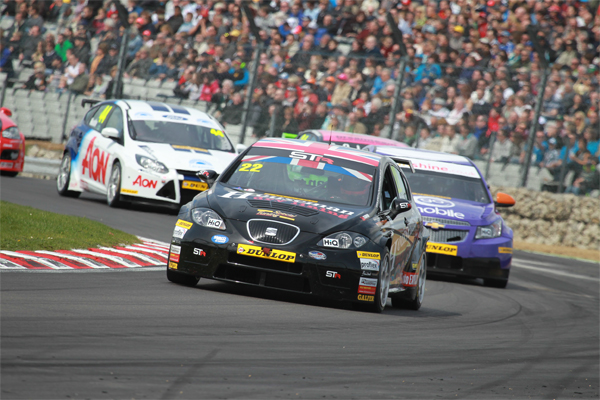 It was to be a disappointing day for Tom Boardman and the Special Tuning Racing team, as Tom would only see the chequered flag once. But all the signs for a promising season in the Dunlop MSA British Touring Car Championship were there for the Lancashire driver.

Tom began the weekend with a convincing showing in qualifying, just 0.542s off pole. With qualifying times so tight at the top he would still have to start the race from eighth. It was a clear sign though of the progress made by the team over the winter and how competitive the car will be in the season ahead.

After a delayed start, the season officially got underway. Immediately, there was drama, when pole-sitter Matt Neal was spun off into the gravel, bringing out the safety car.

On the restart, Tom pounced on Andrew Jordan of Pirtek Racing seizing sixth place round Graham Hill Bend. Straight away he was up behind the Chevrolet of Alex MacDowall. Tom pushed him hard with the pair rubbing door handles down the start/finish line on lap seven, much to the crowds delight. As the skirmish continued Jordan closed the gap on the pair, and on lap 13 he got the better of Tom at Clearways. Tom regained the spot just seven laps later when Jordan suffered a puncture.

The car was showing fantastic pace, but it was not enough to stop the attack from Honda Racing’s Gordon Shedden. On lap 22, Shedden put in a forceful move nudging Tom through Clearways and again through Druids. With wheel-to-wheel contact, the impact broke the steering rack on Tom’s car, forcing Tom off the circuit and into retirement on the penultimate lap.

The Special Tuning Racing team put in some swift work to repair the damage and get Tom out for the second of the day’s races. The incident in race one though would mean Tom starting from 17th on the grid.

Unfortunately for Tom, race two was over all too quickly. Having passed several cars before the first corner, a space opened at Paddock Hill bend when Team Aon’s Andy Neate went wide. Tom saw his chance to dive through but the gap closed as the VW Golf of Onslow-Cole, looked to make the same move. Contact was made and both cars found themselves out of the race on the first lap – Tom’s car once again suffering a broken steering rack and the team having to repeat all the repair work they had done after the first race.

Having retired in the second race, Tom started race three from last place. But the Special Tuning Racing driver fought back, showing huge determination to end the day on a high. By the end of the first lap, Tom had already made up an incredible four places. By lap six he was up to 12th having passed the BMW of Dave Newsham out of Druids Corner, chasing a spirited Tony Gilham. A further spot was then gained as Jordan headed to the pits with his second puncture of the day. Newsham mounted a fight-back and a good contest developed, but Tom showed his pace, successfully holding Newsham at bay to finish in eleventh.

Speaking after the third race, Tom said: “We were very disappointed after the first two races. The third race I started from the back and I made up nine places, so that was pleasing. It’s not the best place for me finishing eleventh, but my engineer told me I was matching the lap times of the leaders at the end of the race, so that’s a good, positive indication for Donington.

“It’s just unfortunate that there was the coming together with Shedden in race one which disrupted the weekend, but we’ll come back even stronger for the next race,” he said.

Following the third race, Silverline Chevrolet driver, Alex MacDowall received a retrospective 20-second penalty for an unconfirmed incident. This dropped him out of his ninth place finish, handing Tom the tenth spot and the final championship point.

The next race takes place at Donington Park on 17 April.