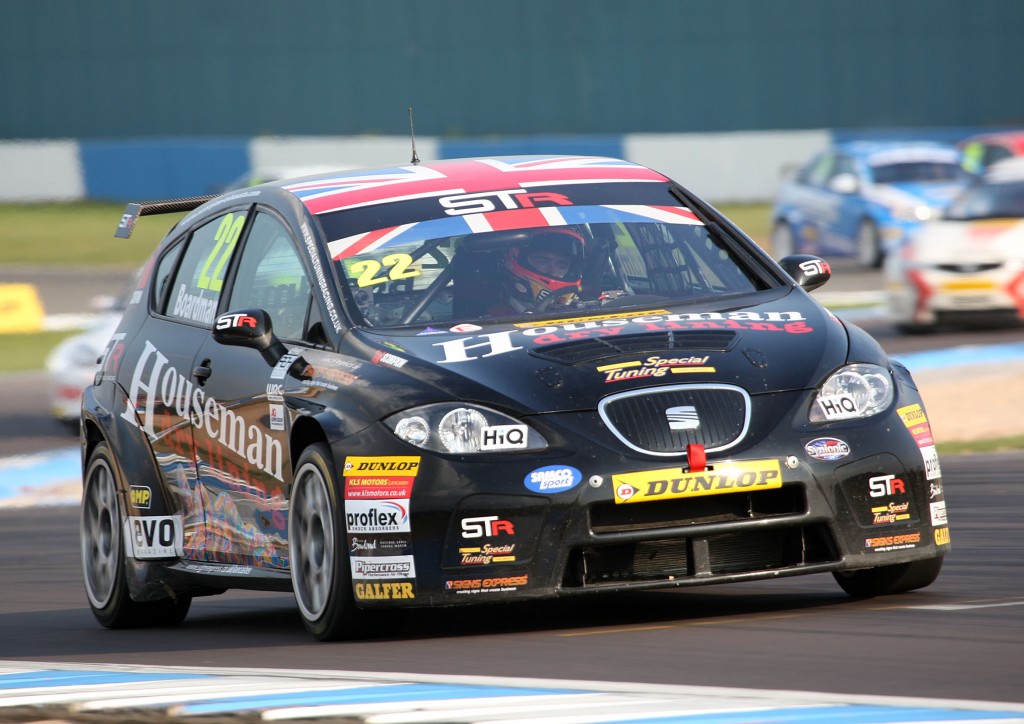 What had started as a promising weekend for Tom and the Special Tuning team at Donington, quickly turned to disappointment as engine issues were to mar the car’s performance in two of the three races in the second round of the Dunlop MSA British Touring Car Championship. After finishing the practice sessions in third and second respectively, all the signs looked good for qualifying , until Team ES Racing’s Chris James collided with Tom, dashing his hopes of a top-five qualifier. Starting the first of the day’s races in twelfth, Tom quickly made a move up the field capitalising on the jostling pack ahead. By lap four he was up to ninth, and in pursuit of Rob Collard in the BMW. Tom piled on the pressure, and several laps of incredible wheel-to-wheel action ensued. Although Tom appeared to have the speed, Collard fended him off and held position. A puncture in lap 11 for the current champion, Jason Plato, put Tom up to eighth where he was to finish. Post-race, Honda Racing’s Gordon Shedden would lose his third place to a technical infringement, handing Tom seventh place. Speaking after the race, Tom said: “I had a bit more power than Collard, but I couldn’t get on the throttle early enough to get the drive and pass him. All I could hope for was him to make a mistake. He was good on his brakes though, so it was a good, clean fight all the way to the end.” After a solid performance in race one, Tom headed out to the grid looking to make further gains in the second race. A misfiring engine though during the warm-up lap saw Tom heading back in, meaning a last-place start from the end of the pit-lane. Before Tom could make any progress, the safety-car was deployed following a spectacular crash involving Plato. Tom closed up on the pack, and on the restart he was instantly alongside and past Chris James and Speedworks Motorsports driver Tony Hughes. Unluckily for Tom, he would have to return to the pits again for an extended stop, the engine problems still not rectified. The team were able to get him back out on lap 12, but by this time he was two laps down. Fired up, Tom then posted what was to be the fastest lap of the race. But unfortunately, it was to be his last, as he was forced to retire on the next lap. In the third race, Tom got a great start off the line, overtaking Tech-Speed’s Paul O’Neill, before the safety car was deployed for two separate start-line incidents. With five cars out of the race, Tom was elevated up to 12th. The race restarted on lap five, and Tom quickly made a further three places. Next up he picked off Shedden and then Team Aon’s Andy Neate on lap eight. Storming through the field, Tom closed the gap on Pirtek Racing’s Jeff Smith and the second Honda of Matt Neal. On lap 12, Tom passed the pair of them moving up to an incredible fifth place. But with just two laps remaining, the team were left in despair as the technical problems that had beset them in the previous race struck once more. In a cruel turn of events the car came to a standstill at the brow of the hill at Coppice. Tom managed to return to the pits, but his race was over. Following the race, Tom said: “We’ve run into one or two problems this weekend, which is unfortunate. We were running really well in the last race, equaling the times of race-winner Mat Jackson. We know we’ve got the pace now, so it’s a step in the right direction. We’ll get these issues sorted, and hopefully put in an even stronger showing at Thruxton.” The next round of the Championship is at Thruxton in Hampshire, on 1 May.