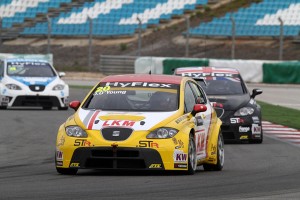 Promise but little reward in Portugal

Both STR SEAT’s showed their potential at the Circuit do Algarve on Portugal’s sunny south coast. The weekend got off to an early start for both drivers who had the pleasure of swimming with dolphins on Thursday. The serious business got underway on the Saturday though, and for Tom, he was starting out for the first time with his new SEAT WTCC 1.6t engine. The team had managed to build and fit the engine in the week preceding the event but there had been no time for testing. Free practice 1 was Tom’s first outing in the car, so not only did he have to learn a new circuit, he also had to come to terms with the new handling characteristics of the car.

Free practice 1 saw both cars needing work to improve the setup, and by Free Practice 2, Darryl was lapping a second off the pace and was 11th quickest overall. Tom, however, was having trouble with a misfire in the engine, and the SEAT engineers looked to try and fix the issue. On top of that, the car suffered a suspension issue and this would lead to his late start in qualifying.

Qualification commenced and Darryl got out to put in some quick laps. He started well and was running well inside the top 12. As the session ran though others improved pushing him down to 14th. Tom got out with 10 minutes to go. On his first flying lap though, the red flags came out, and the session was stopped as the Ford of Tom Chilton suffered steering arm damage and had to be recovered from the track. As the session was restarted both drivers had work to do. Darryl responded and put in the quickest second sector time of anybody. He was going well, but in the third sector he locked up and lost the advantage he had created. He couldn’t improve on his time and finished the session still in 14th.  Tom managed to post a time of 1:56:260 which was just under a second and a half off the pace to qualify in 19th.

Race 1 on Sunday and both Darryl and Tom were looking to make good starts and make up places. They made up places after an incident with Menu, Dudukalo and Weber saw the later two out of the race. Darryl however suffered damage to his steering after contact on the first lap and he would struggle with this issue for the rest of the race. He battled with Engstler for much of the race but could not hold the German driver off. He passed Darryl who dropped to 13th overall. Tom drove a steady race, unable to make too much ground. He managed to get up to 14th and found himself behind his teammate. The race would end with no drama and getting both drivers Yokohama Trophy points. Darryl was 7th and Tom 8th in the Independents Championship.

Race 2 and again both drivers got off to good starts. Again, Darryl suffered damage to his steering from contact made in the pack. Tom was then struck from behind by Dudukalo. This caused suspension damage and forced the bodywork of the car into the rear tyres. He was forced to pit and his race was over. Darryl battled on, and while the Vaillante car of Michel Vaillant aka Alain Menu sped off to win, Darryl held off Charles Ng in a great battle to again finish 13th overall and 7th in the independents.

After the races Tom commented “This was not the ideal first weekend for me with the new engine.  I am looking forward to Curitiba though as I have driven there before and know I will be fast.”

The team are returning to their Forton base to prepare the cars for their impending trip to Brazil for the next round of the championship on 21st and 22nd of July.