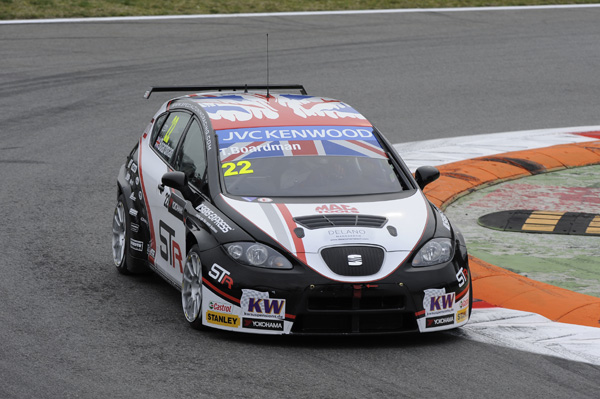 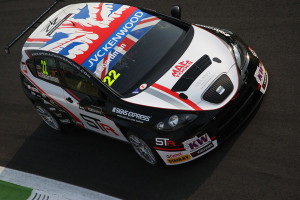 The opening round of the 2013 WTCC Season again saw the team at the historic Monza Circuit just north of Milan. With no pre-season testing being completed, Tom and the team would have to work quickly to set up the car and get on the pace.

On a bitterly cold yet dry day, the newly liveried STR SEAT went out for Free Practice 1.  With some upgrades to the car over the off season, Tom would need to feel the effects of the changes in order to maximize the benefits. Consistency would be the order of the day.  The team worked on the set up in both the free practices and Tom was 14th quickest in both sessions.

For qualifying, the team knew that only a couple of hundreds of a second would need to be made up to get into Q2. Tom went out and again found consistency in P14.  This he held until two minutes to go he dropped to 18th. Tom went out for a final effort and put in his best time but could only manage a tantalizing 13th,  with a time of 1:59:116, which was 0:00:070 outside Q2. In the end he was P14 but moved back to P13 with the withdrawal of the Lada team due to damage.

A very wet day greeted the team on Sunday. Race one started behind the safety car. Tom immediately moved up to P12 passing Engstler as the rain worsened. Lap 5 and a safety car came out after D’Aste spun off. Tom was waiting to move and did so as soon as the safety car was in, making up two more places.  He then got into a great battle with Rob Huff as they fought for ninth place. Tom out braked Huff into the chicane forcing the World Champion to go straight on but the position was not conceded. Huff went on to take James Nash and Tom then went to pass. Overtaking him on the outside Nash moved across and contact was made ending Tom’s race. The damage was a broken sub frame and drive shaft. The car was also marooned in the middle of the track, but after the race it was brought back and the team were forced to pull the car from parc ferme to try and fix for race 2.

The team worked hard and with 1 minute to spare Tom was out and waiting to join the race from the pit lane. He quickly caught up with the pack and made up a couple of places. By lap 5 he was up to 15th  and looking to pass Freddie Barth. Pushing hard though he caught a curb and spun. He rejoined in 17th and then chased after Monje. He could not catch and would eventually finish 16th overall, P8 independent.

After the races Tom commented  “I am hugely disappointed with the result of this weekend, yet am encouraged by our performance both on and off the track. My race pace was good and I am also very pleased with the way that the team worked to get the car fixed for race two. We have to concentrate on those positives and I am looking forward to getting to Marrakech where hopefully I will also have luck with me as well”

The team now make the journey to the only WTCC stop in Africa for the second round on 6th and 7th of April.