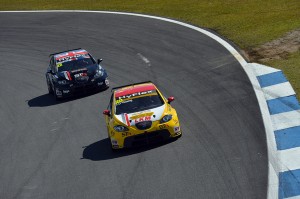 After the long flight to the southern hemisphere, the team arrived in Curitiba, Brazil, for rounds 15 and 16. Darryl had made the longer trip from Hong Kong, and both drivers were eager to get back to driving their SEAT 1.6t WTCC cars after the break following the end of the European rounds.

Both drivers used Friday’s test session to reacquaint themselves with the car and work on set up. For Tom, it was his first real work out in the 1.6t WTCC as engine issues had plagued the car in the previous round in Portugal.

Qualification would be key at Curitiba, and the team worked hard to get the best out of the cars so that Darryl and Tom could get through to the second round. Both cars started off very evenly, going out together to try and draft off each other. At the halfway point of the qualification session one there was just 0.0002 of a second between them. Unfortunately for Tom, he was at that time in thirteenth spot just outside the standings. Both came in to the pits to prepare for a final push to make the second round. Darryl went out first and got himself right behind a train of Chevrolets. Tom went out just after but ended up behind the flailing BMW of Stefano d’Aste who was clearly having issues with his tyres. Darryl made the most of his position and caught a tow from the Chevrolets. He posted a brilliant 1.23.994s. This at the time was the quickest SEAT, and at the end of Qualification 1 was the second SEAT behind Gabrielle Tarquini, putting him in 8th. Tom however suffered as d’Aste spun in front of him and he could not improve on his time. He would qualify 16th with a time of 1.24.601s.

Darryl moved into the second round and went out with all the drivers bar Tom Coronel. He put in three quick laps, the first of which saw him post an even quicker time of 1.23.366s and this would see him qualify for the race 1 in 7th and race 2 in 4th.

Race 1 and both drivers got off to good starts. Darryl remained in 7th behind the Chevrolet of Alex MacDowell. Tom managed to make up three places and was right behind the SEAT of Dudukalo. Right behind him was the BMW of Mehdi Bennani, and on lap 5 the man from Morocco managed to pass Tom. Not to be out done though, Tom pulled a brilliant move back on him and re-took the position.  For the next 6 laps Tom was under immense pressure from four BMW’s and the two Fords. Both Bennani and d’Aste took turns to tap the back of Tom’s car at the chicane. Tom did not relent and was holding well until Bennani pushed up the inside and forced his way past. Tom moved back to the racing line to defend from more cars passing. In doing so he clipped the back of the BMW in front and Bennani lost the place back. In what can only be seen as a harsh decision in the light of the contact he had been receiving during the race, the stewards decided to hand Tom a  drive through penalty, effectively ending his race.

Darryl looked to be having a fairly uneventful race. Inside his car though it was a different story as he was having trouble selecting third gear. He managed to get his car home though and finished where he started in 7th overall and 3rd independent. This was a fantastic result as all the cars in front were Chevrolets and Gabrielle Tarquini.

Before the second race, the team had to fix the gearbox issue with Darryl’s car. With only 15 minutes to do this it was always going to be a tall order. Despite their best efforts they just missed the allotted time and Darryl had to start race 2 from the pit lane.

Tom made up a couple of places at the start and by lap 4 was in 13th. The safety car was then deployed as Charles Ng crashed. Darryl came into the pits and the gear box issue had not improved. He was forced to retire from the race. At the restart Tom again found himself behind Dudukalo and in front of d’Aste. He held off the latter well for the remainder of the race to finish 12th overall, 6th independent.

Darryl summed up his weekend:  “It was not a fitting finish to the weekend we’ve had here in Brazil.  STR had done a fantastic job all weekend and we’ve had very strong pace throughout.  The car performed extremely well during the qualifying and races, unfortunately the gearbox let us down today.”

“The problem already came mid way through race 1, with the problem being our 3rd gear.  It gradually became worse throughout the race so I took the car a step back to get it to the finish line.  Although it is our best finish of the season, it isn’t a good mood since we know we could’ve achieved more this weekend.”

“With that being said, we’ve made fantastic progress and most importantly, we have the pace to compete.  Although the USA race is 2 months away, I’m already thinking about it and I hope to carry the form we had here in Brazil over to Sonoma.”

After the races Tom commented:  “I am still learning about the car and I feel this weekend I made good progress. After the frustration of Portugal, and then the break, I haven’t had any quality time to make the necessary adjustments to my driving in order to get the best out of the car. I could also have done with a little more luck in qualification, and we do need to improve in how we qualify. I am now looking forward to the next round in Sonoma where I can capitalise of the progress I have made.”

The team now move to the United States for the Sonoma round on 21st -23rd September.