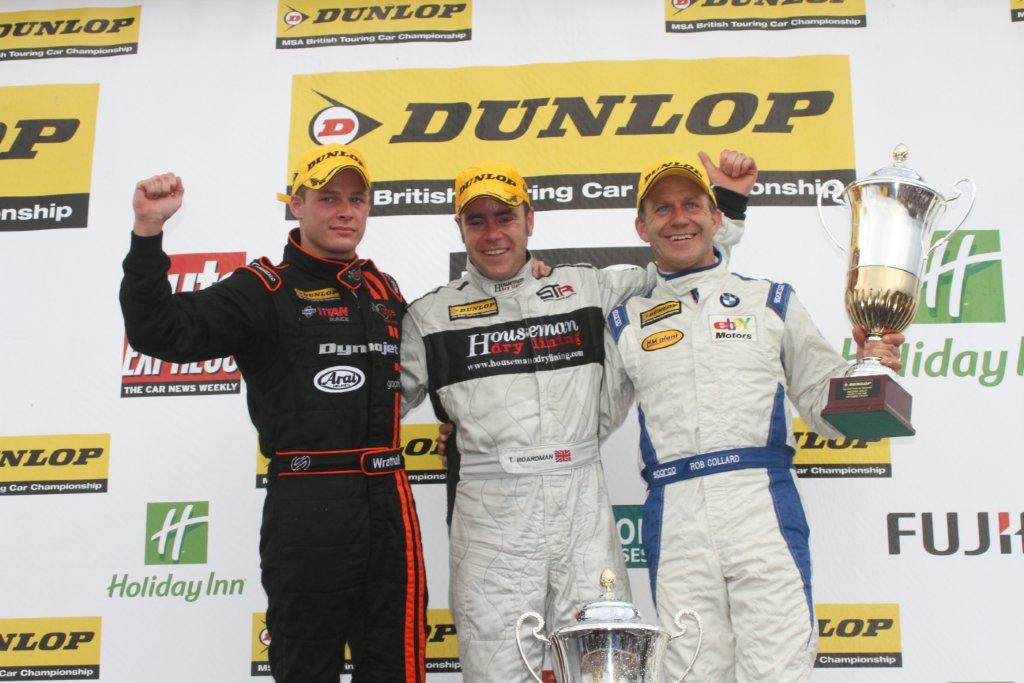 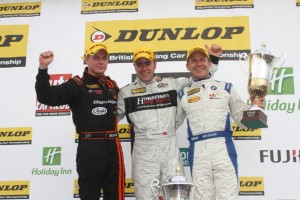 Special Tuning Racing celebrated its maiden win in the Dunlop MSA British Touring Car Championship with victory for driver Tom Boardman in the third race at Knockhill on Sunday.

Tom was clearly ecstatic as he climbed from his STR SEAT Leon: “Fantastic!” he exclaimed. “We’ve had it tough recently, we’ve been in strong positions before and things haven’t gone our way, but today we fought deep and finally it’s all come good! It’s a huge win for us, the whole team and our sponsors deserve this!”

Having been hampered with engine issues in qualification, Tom was confident that progress would be made in the day’s three races. He didn’t disappoint.

Gaining a place on the first lap of race one as Alex MacDowall slid wide, Tom then made a great move on James Nash getting the better of him out of Clark’s corner and along Hislop’s straight. And on the very next lap he pulled off the move again on Andrew Jordan at the same spot. Promoted to eighth as a collision on lap seven brought out the safety car, Tom was immediately on the back of Rob Collard at the restart and certainly looked to have the pace on him. Unable to get past though, Collard ran wide and Nash got the overlap on Tom along the pit-straight passing Tom at the Duffus dip. Seeing that Jason Plato was struggling after a small off-road excursion on lap 22, Tom closed down the defending champion but with Plato defending resolutely he couldn’t make the pass. With Mat Jackson retiring on lap 24, Tom went on to finish the race in an impressive eighth place.

Clearly having the pace on Nash at the start of race two, Tom pulled off a great move to out-drag him down the start/finish line at the end of lap one to take seventh, and by the next lap he was looming large in Plato’s rear-view mirrors. Tom got the upper hand on the pit-straight on lap nine to take sixth before the safety car was deployed for an incident two laps later. At the restart, he pulled out a gap on the chasing pack and with the leaders clashing ahead, he was right back in the mix by lap 20. Tom went on to finish in a brilliant sixth place, his second top ten of the day.

As a result of the top seven driver reverse grid, Tom started the third race in second behind Plato. Tucking in behind Plato he immediately piled on the pressure. On lap four, Tom moved inside down the straight. Plato took a tight line into the SEAT curves causing him to lose shape, but pursuing the racing line Tom exited with speed and closed in. Having to back off he touched the rear of Plato’s car and Plato ended up on the grass, triggering the safety car as Tom took the race lead. With the race about to restart, Tom slowed for the hairpin and then got the jump on Rob Collard. But in the final laps, the gap between him and Tom closed as the rear-wheeled BMW strengths came into play. Collard threw everything he could at Tom and there was contact at the hairpin as Collard locked up. Tom held on beautifully under the pressure bringing the SEAT Leon home in first place, his first ever outright win in the BTCC and his first independents’ victory this season.

Speaking after the race, Tom said: “Collard was coming at me hard at the end there, his car must have been better on its tyres, but I held my nerve and we’ve done it. I knew we had the potential to win races and we really showed it today.”

The team now head to Rockingham in two weeks’ time looking to build still further on the success of this weekend.