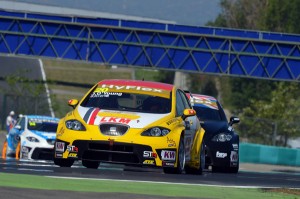 It was a mixed weekend for both drivers which ended ultimately in disappointment for both. Darryl O’Young, fresh from a strong weekend at Slovakia the week before continued his good form throughout the Saturday. Tom Boardman was also upbeat after having his best showing of the season to date at Slovakia. It was quickly apparent though that the TDi SEAT would not be suited to the Hungaroring due to the nature of the corners here and the handling characteristics of the diesel.

Darryl was quick to show his speed in the free practices, topping the times on a number of occasions and making continual improvement. He posted a best time of 1:56.687. Tom was racing against last years times posted by Tiago Monteiro in the TDi. In free practice 2 he beat the quickest time posted by a diesel by around the Hungaroring but was unable to break the 1:57:00 mark.

In qualification Darryl continued his pace posting a 1:55:794. He qualified the first round in 7th to move into the second round. Tom put in 1:57.890 in the first qualification round. Everyone else was had broken the 1:57:00 barrier and it was obvious he could not wring any more out of the car. In order to save on tyres he made the decision to finish the session early. He would start 20th in both the races. In qualifying two, Darryl posted 1:55.768 and qualified in 8th meaning he would start the second race in 3rd.

Race day, and Tom knew he would have work to do. Darryl was confident in making up places in the first race. As the race got underway, Darryl made good ground from the rolling start and headed down to the first corner. There, however, he was hit by Norbert Michelisz and sent wide off the track. He recovered well, but as he tried to make it back onto the track he was hit again, this time by the BMW of Franz Engstler, and suffered damage to the steering upright of the SEAT. He limped back to the pits for repairs.

Tom got off to another flyer and was quickly up five places. In the melee of the first corner though, he was hit by the SEAT of Dudukalo. This sent him off track and into the barriers. The SEAT suffered significant damage to the front, and ended Tom’s race weekend there and then.

The STR mechanics worked fast on Darryl’s car, fixing the steering upright and getting him out in the race to test the fix. This fast work enabled him to keep his starting position of third on the grid for race two.

The second race, and the excited Hungarian crowd were shouting for Michelisz who started right behind Darryl. The BMW powered off the line and past Darryl who quickly realised the car was not one hundred percent. He fell further back as issues with the brakes, and the damage from the first race took its toll on the SEAT. Darryl then began to improve his lap times, and under pressure from the Fords, held his ground. He was able to coax the SEAT home to finish 7th in the independents, 13th overall.

Darryl commented “This weekend was the complete opposite of last weekend. Last weekend we had a bad qualification but strong races. This weekend we qualified well but had two bad races. The first race was short. The first corner incident with Michelisz then Engstler was a tough result.  The second race we had damage on the car.  My team did very well to fix the damage but we had problems with brakes, and with no brakes it is difficult to finish the race. To get a good weekend you need your car in good condition throughout.”

Tom tried to remain positive: “When you start from the back there is always a possibility that you will be caught up in an incident at the start. Last week I managed to avoid trouble, but this week I was very unlucky to be hit after making yet another great start. I am looking forward to Portugal and getting my hands on the new SEAT 1.6t WTCC engine which will hopefully then see me not having to start from such a position”

The team’s next race weekend is at Salzburg on the weekend of 19th – 20th May.