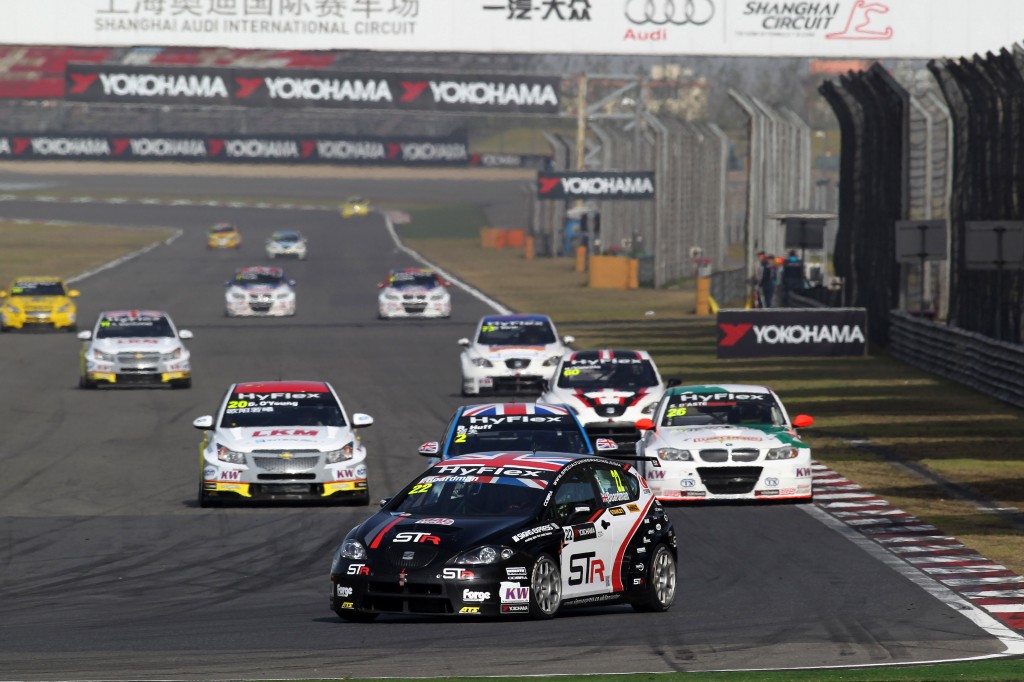 A great weekend’s racing for Tom and the team with what should have been independent podiums in both races.

The team arrived at the Shanghai International Circuit on the back of a good weekend in Japan. Tom was quickly back on the pace running in the top ten for the practice session finishing in ninth overall. He continued this in the free practice sessions on the Saturday morning, ending the second free practice as seventh quickest. Looking to get a good qualification, Tom set out for more of the same. The session proved to be very tight with less than a second and a half separating the top twenty cars. With no team mate to work with, Tom could not find a drafting partner to help on the long straights, and though he improved his overall time he could not find a lap to get him into the top twelve. He would eventually qualify in twentieth with it all to do in the race. With his strong performance in previous sessions though, and his ability to get away from the start quickly, places could be made up in the races but work had to be done.

Sunday, and Tom was quick again in the warm up but would need to start well to make up places in the race. This he duly did. In race one he made up 11 places on lap one, passing cars on the opening drag to the first corner, then skillfully missing an incident at the chicane he made up a few more places. On lap 2 he then passed Pepe Oriola and by lap 3 was up to 6th behind Gabriele Tarquini. Tom then found himself in a gap where he couldn’t make up time on Tarquini but was not being pressured from behind. He went on to hold the position to claim 6th overall and 2nd independent.

Race two was equally good for Tom. Again he made a cracking start off the line and by lap 2 was in tenth spot chasing down Dudukalo in the Lukoil SEAT. With Pepe Oriola retiring, Tom moved up to 9th. He then passed Dudukalo to move up to 8th where he then came under pressure from a group of drivers including the Chevrolet of Colin Turkington, Monteiro in the Honda and Cerqui in his BMW. Tom held off this pack quite comfortably as positions behind him kept changing. Turkington’s Chevrolet was clearly very strong though and he managed to shake off the other three challengers and mounted a concerted effort to try and pass. On the final lap he made a fairly aggressive move and forced his way through meaning Tom would finish in 9th overall and Third independent. This would later change to 8th as Yvan Muller received a 30 second penalty demoting him to 12th.

After the racing Tom commented “To make the podium twice here is a great result for the team and myself. I wish the season was just starting now! The car is coming together brilliantly and I am really getting to grips with it; it’s such a shame I have only had the 1.6t engine for the last four meetings. I am really looking forward to the next rounds in Macau. I made the podium last time I raced there and will be pushing hard to repeat the performance.”

News came through hours after the racing that along with four other drivers, Tom would receive a 30 second time penalty for cutting the chicane in race one. This was done to avoid a multi-car incident but would mean a drop of 6 places overall, 4 in the independents.