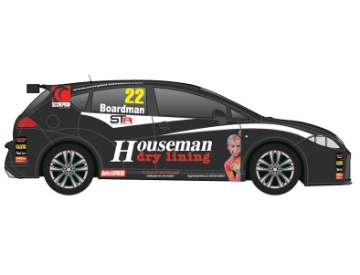 Special Tuning Racing have named Houseman Dry Lining as their new title sponsor for 2011, it has been announced. This announcement will see Tom Boardman continue to race for the team in the 2011.

“We felt in order to move the team to the next level in terms of on track performance and make the team more attractive to corporate partners, we needed to launch a new brand. The transition from Special Tuning UK to Special Tuning Racing is now complete,” explained John Boardman, STR team principal.

“We are extremely proud to have Houseman Dry Lining on board for the coming year. The team is committed to a very competitive season throughout 2011 and a title sponsor coming on board adds weight to our dedicated campaign.”

Rob Houseman, Houseman Dry Lining’s managing director, meanwhile added that the deal might end up being for more than one-year.

“We are very excited about our deal with Special Tuning Racing this year,” he continued. “We have been a sponsor within the BTCC paddock for numerous seasons across several formulae and considered our options very carefully as to where we wanted to be in 2011.

“STR are poised to be ultra competitive this year and we feel that their dedication to performance, combined with our commercial input, provides the key ingredients for a successful partnership.

“We have had offers from other competitive teams but STR offered us a fabulous package.

“We are looking forward to working closely with them throughout the coming season and would welcome a chance to extend our investment into a multi-year deal if both parties achieve their objectives.”

Special Tuning Racing may run up to four cars in 2011. The team is currently said to be in ‘negotiation’ with several drivers and driver managers to sign an ‘exciting’ line up.