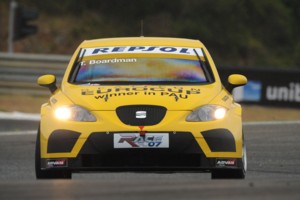 Tom Boardman, from Forton in Lancashire, will contest the FIA World Touring Car Championship this year in an ex-works petrol-engined SEAT Leon. The 2008 SEAT Leon Supercopa Champion will drive for the SUNRED team, with whom he made his WTCC race debut last year.

Having won last year’s WTCC drive for winning at the Pau round of the SEAT Leon Eurocup, Tom went on to finish 3rd in the WTCC Independents’ Trophy category at Estoril in Portugal, driving a Leon. Not only was it a great result, it allowed Tom to establish a good working relationship with the SUNRED engineers, which will now carry on throughout 2009.

The talented 25-year old racing driver sealed the deal to drive in this year’s WTCC when he was in Spain last week for a double-awards ceremony. The first took place in Barcelona, where he was invited by the President of SEAT, Mr Erich Schmitt, to attend a SEAT Sport Gala Evening. Tom then travelled to Madrid for the official Spanish Motorsports Federation Awards, where he collected his trophy for winning the 2008 SEAT Leon Supercopa title.

This season will witness Tom’s long and successful association with the Spanish car manufacturer extend into its sixth consecutive year, as he first raced a SEAT in the UK-based Cupra Championship in 2004. Whilst this will be Tom’s first attempt at a full WTCC season, he has raced mainly overseas for the last two years – and his previous experience at racing the highest level should see him start competitively and challenge for the Independents’ crown.

Last year Tom won a total of eight races, scored 11 podium results and qualified on pole six times in 12 race meetings. In the Leon Supercopa series, Tom scored an unrivalled six race wins, qualified on the front row five times (three poles; two seconds) and set eight fastest lap times to win the title and become the only driver ever to win SEAT titles in the UK and Spain.

Tom Boardman said: “It all feels like a bit of a dream at the moment – I feel like the luckiest man alive. Racing in the WTCC has been my aim for some time now, and I feel my time has come to show everyone what I’m capable of.

“Tom Coronel did really well in the SUNRED Leon last year, and even won the second WTCC race in Japan outright. I think together we’ll make a very strong team and be able to challenge for the Independents’ titles in both the teams’ and drivers’ categories.

“I’ve raced at half of the circuits already and it will be fun to go to new places like Brazil, Mexico, Morocco, Japan and Macau. I can learn a new circuit very quickly. As soon as I arrive somewhere new I go for a jog around the track and that helps me learn the layout, so racing for the first time at these new tracks won’t be such a disadvantage.

“I’ve watched the WTCC on television for several years and always dreamt of competing in it. Now I have this great opportunity, I’m going to give it one hundred percent.”

Tom will continue to be involved in the Triple R team, which plans to continue to develop young driving talent, borne out by the fact that in each of the last two years a Triple R driver has progressed to the BTCC (Harry Vaulkhard and Liam McMillan). If anyone is interested in driving for the Championship-winning Triple R team in 2009, please contact Emlyn Evans on +44(0)7977 430131 / e-mail: [email protected]